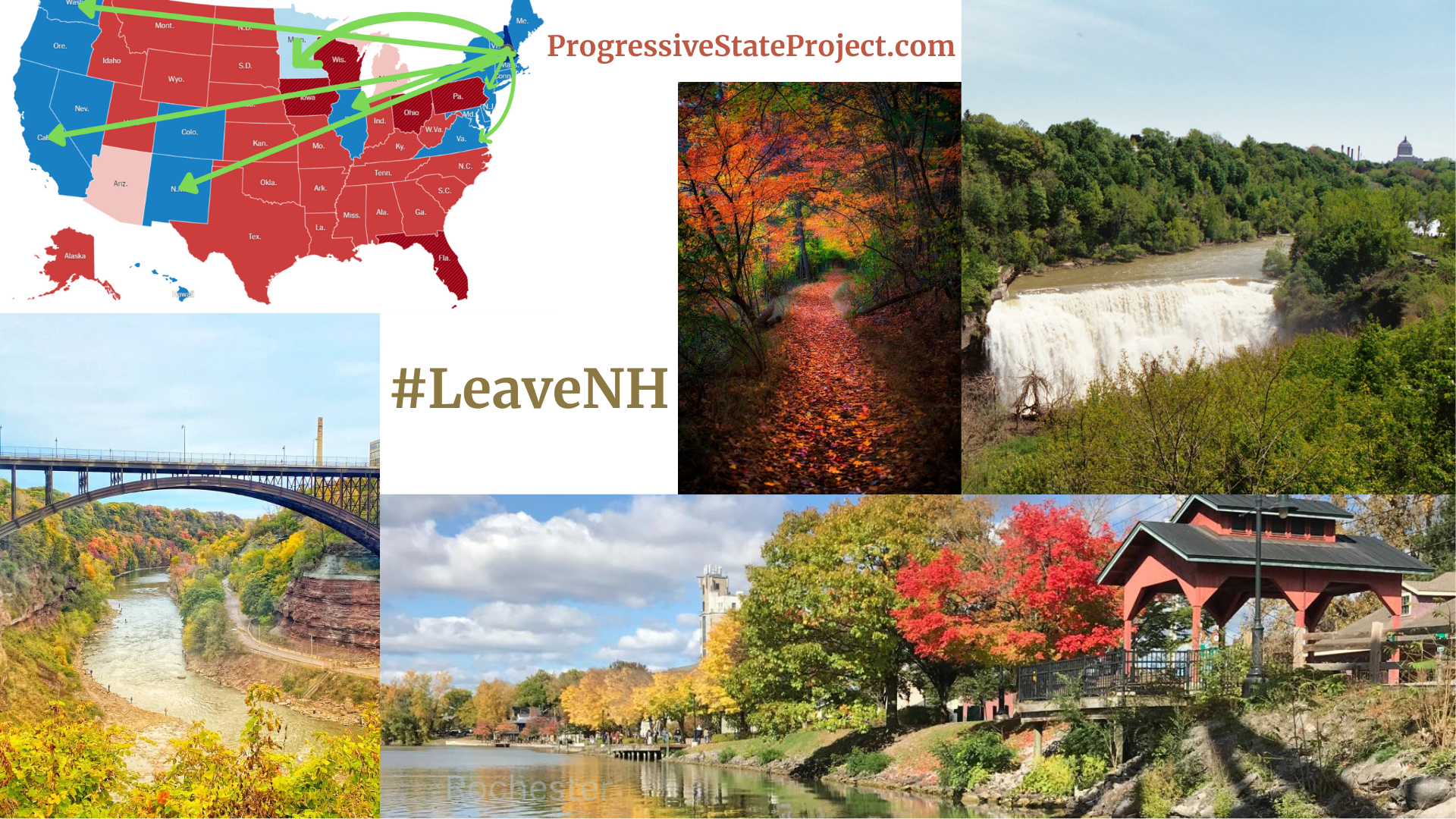 As I drove to a hiking trail the other day, I found myself caught up in a swarm of Massachusetts-plated cars. This was it; one of the real perks of living in New Hampshire, the Fall Foliage!! Yet there I was, neck deep in leaf-peeping visitors, crawling forward at 10 MPH, admiring the changing leaves from the highway. Trying to make the best of the situation, I take the next exit, hoping for a quaint bakery with blueberry scones and unburnt coffee. After several minutes of driving, I finally get to a gas station with a Dunkin. Civilization, at last!

Luckily, while passing through on a previous vacation, I spied a hidden gem in Upstate New York: A small city named Rochester.

It’s no secret to anyone living in New Hampshire that the cost of housing is exceptionally high, even compared to famous smaller American metros. B-tier cities like Nashville TN, Atlanta GA, and Olympia WA are all comparable or even cheaper than New Hampshire. A dingy condo in Manchester will run you $150,000. In Rochester NY, there are 200+ listings for under $150k, with more than half of them being real, full houses. Buying property and building equity is such an important part of setting yourself up for financial success in life. But how are you supposed to do that when starter homes are non-existent in the local market? Actually, that’s not entirely true…there is a nice crackhouse down the street….. it sold for $167,500. Houses in the city of Rochester can still be run down, but by coming up to the mid-five figure range, you can actually get into a house that serves as a ‘Roc’-solid investment towards the future. And if that weren’t incentive enough, the new Greater Roc Remote program provides up to $19,000 in relocation assistance and home buyer incentives, making it even easier to become a homeowner in upstate New York.

Even as you move to Rochester NY from New Hampshire to be better off financially, you won’t have to trade-off in the way of natural beauty. The Adirondack Mountains, the Letchworth and Watkins Glen State Parks, and countless other trails provide as much adventure as any hiker could ask for. The 46 Adirondack High Peaks stand waiting as a great challenge to even the most experienced hikers. The Finger Lakes region of upstate New York is another amazing attraction of the area. Just like New Hampshire, the Finger Lakes provides many opportunities for boating and water sports, with the added benefit of being a famous wine country. Second only to the Napa Valley region in the United States, the Finger Lakes wine region is not to be missed by anyone considering themselves a true wine connoisseur. And while it is not IN Rochester, the world-famous Niagara Falls is a mere 90-minute drive away.

Rochester doesn’t just rest on its natural laurels though. It earns fresh accolades daily because Rochester is, among many things, a college town. Rochester Institute of Technology, University of Rochester, Nazareth College, and other universities help Rochester cultivate the classic college town culture, and then put it on steroids! Companies like Xerox, Kodak, and Bausch & Lomb were founded in Rochester due to the city’s unique and wide base of skilled professionals who graduate from Rochester colleges each year. Western New York is so impressive that it is where Federal and State agencies are investing millions of dollars to create a new tech hub. Also, the presence of so many colleges fills the city with young adults and the youthful energy they bring, the energy of exploring, and creating new ideas.

The city of Rochester itself only has around 200k people. The greater Rochester metropolitan area has around 1 million people. But you would never know it’s that small with the range and depth of cultural events, arts, and festivals that call Rochester home. The Puerto Rican Festival, the Greek Festival, the Corn Hill Arts Festival, the Lilac Festival, Fringe Fest, the list goes on and on!  And when there isn’t some large event, the array of shops, restaurants, bars, and other attractions will keep you busy. Park Ave is one such neighborhood, frequented by many college students and young professionals. Just north of Park Ave in the heart of the city, is the Rochester Public Market, where you can buy your fresh foods from local vendors and chow down at the famous Juan & Maria’s Empanada Stop. But if you can’t make it to the market, there’s always Wegmans, the regional grocery store with a seemingly cult-like following.

One of the sources of Rochester’s unique culture is its unique history, including a history of diversity, equity, and inclusion before most people were even thinking about those progressive aspirations. Even Trevor Noah, Comedian and TV host, was surprised to discover these long-held beliefs in such an otherwise unassuming place. But with historic figures like Susan B. Anthony and Frederick Douglass, it’s no surprise that modern Rochesterians continue the struggle for tolerance and inclusion with events like the Roc Pride Fest.

Rochester is America’s biggest small town!! To get the same experiences outside of Rochester, you would have to live in a coastal metro of millions! So I’m calling it…. so long New Hampshire. Would the last person to leave please turn the lights out?? That is unless a nor’easter hasn’t taken the power out.